The last week the ESA Living Planet Symposium 2013 was held in Edinburgh. It was a bi-annual event organised by ESA to present the results of ESA EO missions in exploitation. Here Planetek held an oral presentation about the C-wams project, which is studying water quality (WQ) and detection of harmful algae bloom (HAB) in the Persian Gulf area. Furthermore one image from the project was judged one of the most interesting among the ones from all the projects presented in the Symposium and was published on the ESA website as “Image of the Day” the 13th September. (See the full image by clicking here or on the image below) 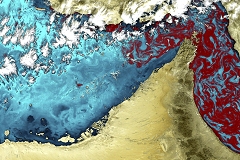 Apart from the satisfaction derived from the two things, I would like to highlights the reasons which made the project so “interesting”.

I will not bore you with a complete description of the project (if you are interested to it or to the paper presented at the symposium, you can go to the project page).

The short story is: to demonstrate the feasibility of a EO based monitoring service of coastal sea areas nearby Desalination Plants in the United Arab Emirates. Why?

Desalination Plants takes water from the sea, then part of it is converted to drinkable water and the remaining part (a bit warmer and with 15-25% more salt) is discharged back to the sea. For both processes of “taking water” and “discharging water” from the sea, the quality of the water is relevant. For the former, some phenomenon can damage the desalination plant, if not adequately mitigated: the most common is a very high density of algae into the water, the so called algal bloom (AB). AB can be constituted by various type of algae, in some cases including harmful or toxic species (becoming HAB). The most evident effect of AB is the colouring of water and for the case of HAB the massive death of fishes. 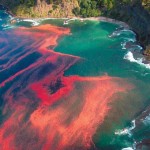 Aerial photo of a Red Tide

Along the UAE coasts there are many big Desalination Plants (actually the largest one in the world is there) and in that area a particular HAB type is becoming very frequent and widespread: it gives to the water a strong brown / red colour, so the name Red Tide.

The Environmental Agency of the Emirate of Abu Dhabi (EAD) adopted one of the most advanced legislation in the area to regulate Desalination (and other industrial) Plants and their impact on the environment: it has been inspired by the European and USA legislations. EAD is well aware of the importance of monitoring WQ and HAB events, not only for “industrial considerations” (think else to the impact to aquaculture), but also to the citizen’s health and to the tourism.

So it comes the C-wams project’s proposed service:

To implement this demonstration service C-wams is adapting existing EO technologies to the particular study case. The real “innovations” of the projects can be considered:

These aspects are of great interest for ESA and obviously for Planetek! 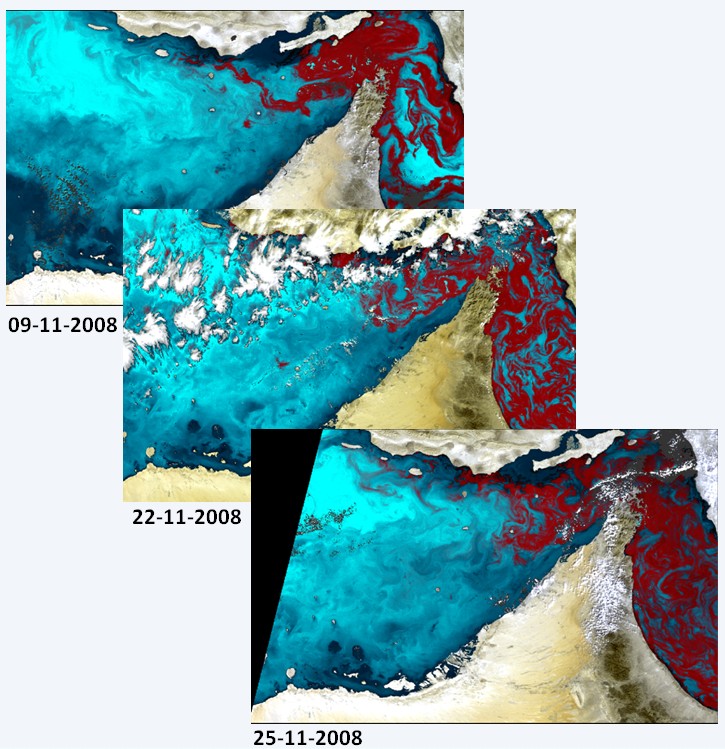